To run MSFconsole on Linux, open a terminal, cd into the framework directory and type:

If all goes well, you'll see the following prompt: 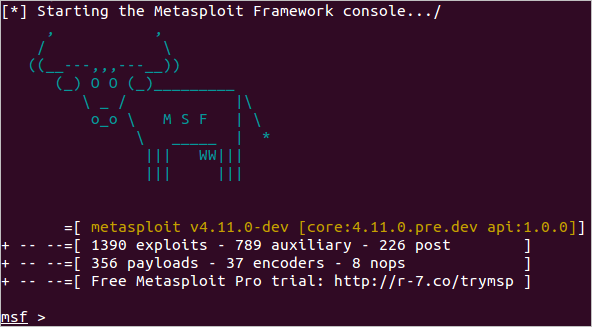 However, if this is first time you are accessing the console, you may see an error indicating that you are missing some gems. To fix this error, run bundle install to grab those gems.

After you run bundle install, you can try to launch the console again by retyping ./msfconsole.

If you are using a commercial version of Metasploit, such as Metasploit Pro, you can run ./msfpro to launch the console.

If you're a Windows user, launching MSFconsole is really easy. Go to the Start menu and choose All Programs > Metasploit > Framework > Metasploit Console.

If you prefer to run the console from the command line, open a terminal and run the following commands:

If the console successfully loads, you'll see the following prompt:

Getting Help for MSFconsole Commands

To view help while you are in the console, use the following commands:

There are a few types of modules. The module type depends on the purpose of the module and the type of action that the module performs. The following are module types that are available in the Metasploit Framework:

There are two types of datastores: