When firewalls have badly configured or lax egress traffic filtering policies, they open the network up to attacks from reverse shells, data exfiltration, and other forms of exploitation. In order to identify the open ports that allow outbound traffic and to verify that your egress filtering policies properly block traffic, you can run the Segmentation and Firewall Testing MetaModule.

The egress target, egadz.metasploit.com, is a server hosted by Rapid7 and has been set up to have all 65,535 ports open. Each port is configured to respond with a single SYN-ACK packet. In its default configuration, the MetaModule initiates a port scan using Nmap’s default 1000 most common ports; however, if you need to include additional ports, you can define a custom port range.

The Segmentation and Firewall Testing MetaModule uses the following states to categorize ports.

Setting Up an Egress Testing Server

The Firewall Egress Testing MetaModule uses an external server hosted by Rapid7 to identify open outbound ports from an internal host. In some cases, you may want to set up and your own egress testing server. For example, if you want to test egress between different endpoints or if you do not want to send data to a server on the Internet, you can set up a custom egress testing server.

To help you set up a custom egress testing server, Metasploit Pro provides you with a script that you can run on an Ubuntu 12.04 LTS server. The script can be downloaded from the Projects page.

To set up an egress testing server, you need to perform the following tasks:

For more information on setting up a network interface on a virtual machine, please visit the documentation for your virtualization software.

Set Up a Custom Egress Target

To set up a custom egress target, you will need an Ubuntu 12.04 box that is configured with two IP addresses. The two IP addresses are needed for the following interfaces:

After you set up the box with two addresses, perform the following steps:

If your browser is not configured to automatically download files, a dialog window will appear and prompt you to save the file. You will need to save the file to your computer.

After you have set up the egress target, you can run the Segmentation and Firewall Testing MetaModule.

The Segmentation and Firewall Testing configuration window appears. 3. From the Scan Config tab, choose one of the following scan target options: 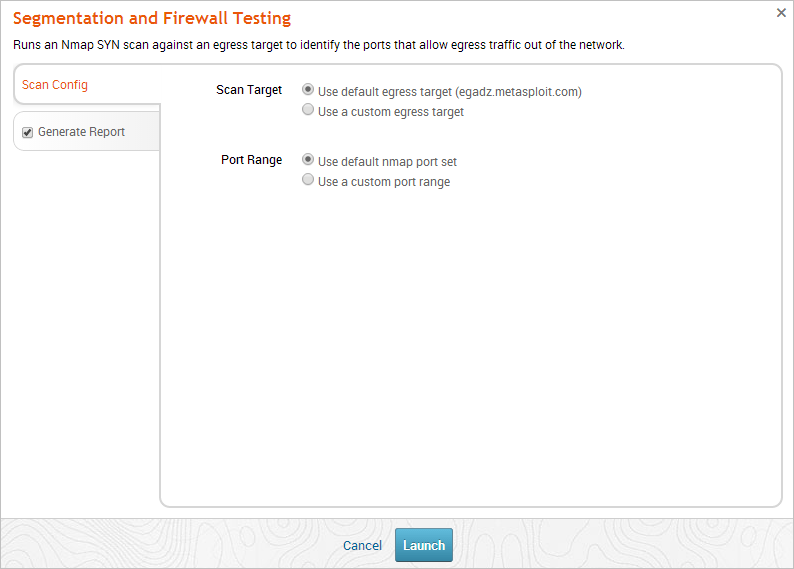 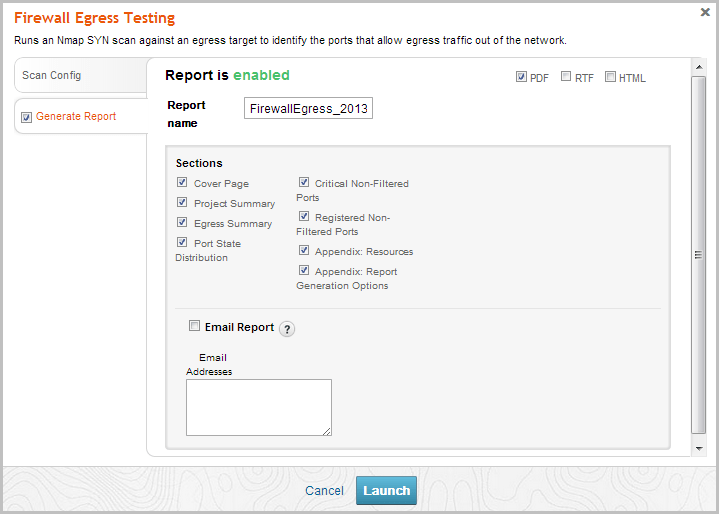 If you want to email a report, you must set up a local mail server or email relay service for Metasploit Pro to use. To define mail server settings, select Administration > Global Settings > SMTP Settings.