The Payload Generator enables you to create a properly formatted executable that you can use to deliver shellcode to a target system without the use of an exploit. The Payload Generator provides a guided interface that walks you through the process of generating a dynamic payload or a classic payload. Depending on the type of payload you choose to build, it will display the applicable options that you can use to customize the payload.

You use the payload generator when you need to build a standalone binary file that delivers a custom-built payload. Binary files, such as .exe and .bin files, are typically delivered through client-side exploits, such as phishing emails or social engineering attacks, which means that you will probably need to be able to bypass anti-virus detection to execute the shellcode on the target system. To help reduce anti-virus detection, the Payload Generator enables you to do things like encode the payload and use a dynamic executable. 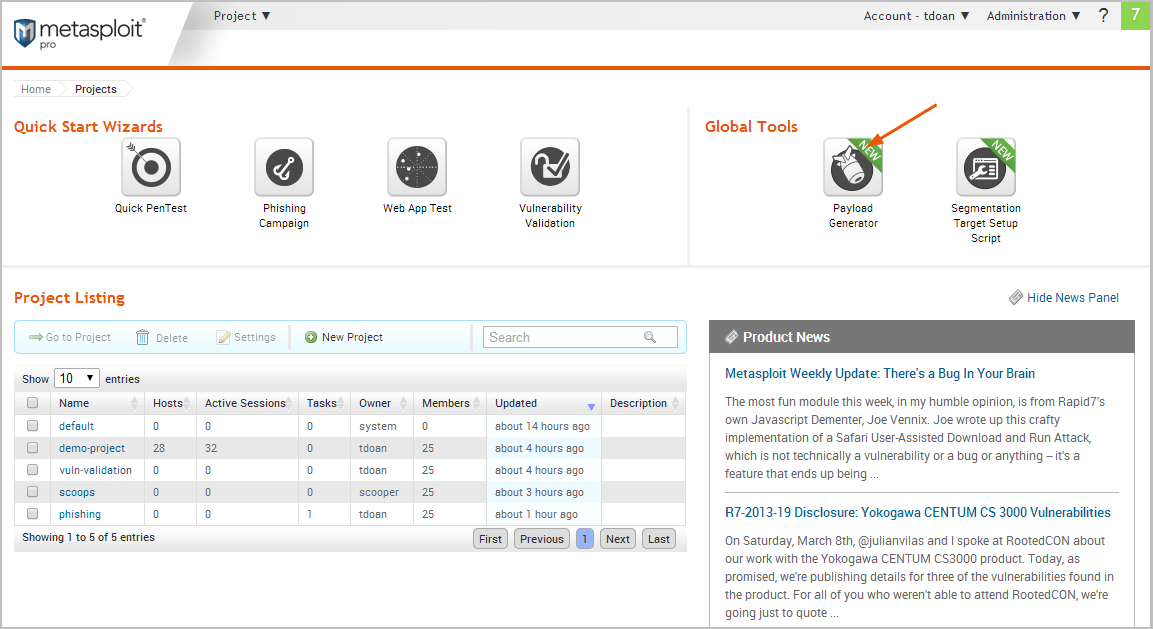 The Payload Generator enables you to build a Windows executable that uses a dynamic stager that is written entirely in randomized C code. The dynamic stager does not use an executable template or shellcode, which allows it to behave similarly to a standard Windows application. The resulting executable is different each time it is generated, so that anti-virus software will not be able to identify the stager as Metasploit shellcode.

Metasploit Pro offers dynamic payloads for Windows platforms only. These payloads are compatible with any Windows x86 and x86_64 system.

This is the type of payload that the exploit will deliver to the target. Choose one of the following payload types:

The stager is what the payload uses to set up the network connection between the target machine and the payload handler running on the Metasploit server. The stager enables you to use a smaller payload to load and inject a larger, more complex payload called the stage.

Choose one of the following stagers:

Specifies the payload that is delivered by the stager.

Defines the IP address the payload connects back to. (Reverse connections only)

Defines the port the payload connects back to.

Defines the port that the listener binds to. (Bind connections only) 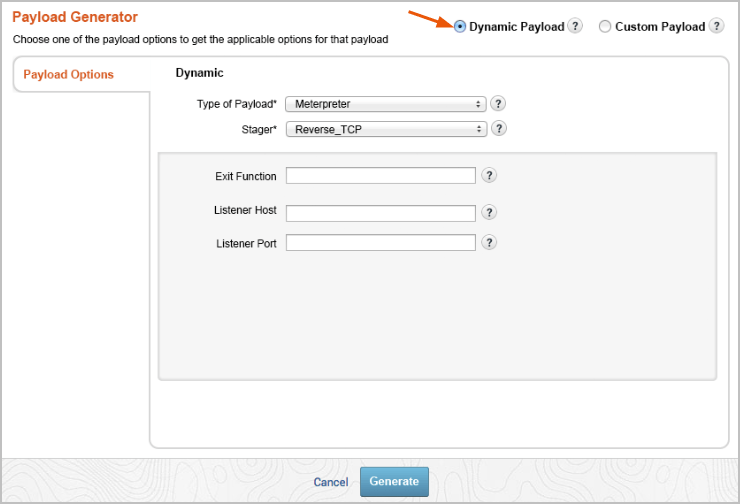 The list will display applicable stages for the stager you have selected.

If your browser is not configured to automatically download files, a dialog window will appear and prompt you to save or run the file. You will need to save the executable to your computer.

A classic payload is built the traditional way—from scratch. The Payload Generator is particularly useful when you need to build a payload in various formats and encode them with different encoder modules. You can build a variety of payloads based on the operating system, architecture, type of connection, and output format that you need for a particular host.

The following are the most common options that are available for classic payloads:

The Payload Generator shows you the options that are available for the architecture you have selected.

The following architectures are supported:

Specifies the type of payload that the exploit will deliver to the target.

The Payload Generator shows you the payloads that are available for the platform you have selected.

Specifies the type of stager that the payload will use to set up the network connection between the target machine and the payload handler running on the Metasploit server.

The stager enables you to use a smaller payload to load and inject a larger, more complex payload called the stage.

The list of stagers that are available will vary based on the platform and architecture that you have selected.

Specifies the function to call when a payload completes so that it can safely exit a thread.

Choose one of the following exit functions:

Defines the IP address that you want the target host to connect back to.

Defines the port that you want to use for reverse connections.

Enables you to specify an additional the shellcode file that will run in a separate, parallel thread while the main thread executes the payload.

Defines the length of the NOP sled you want to prepend to the payload.

Each NOP you add to the payload adds 1 byte to the total payload size.

The options that are available for a payload vary based on its architecture, platform. and payload type.

At a minimum, the payload should use the following settings:

An encoder enables you to eliminate bad characters from a payload so that you can use it with a particular exploit. A character is considered to be bad if some aspect of the exploit makes it impossible to use. For example, many applications interpret a null byte as the end of a string. If it appears anywhere in the payload, the shellcode will terminate before it completes and cause the payload to fail. In this particular case, you can apply an encoder that removes null bytes from the payload.

An encoder does not guarantee that a payload will evade anti-virus detection, but it will ensure a payload does not contain bad characters that can cause issues with an exploit or produce unintended results.

The following are examples of common bad characters:

There are many different encoders that are available in the Metasploit Framework, which can be used for various situations. For example, some encoders, such as alpha_mixed and alpha_lower, can be used to replace characters with all alphanumeric characters, which can be useful for applications that only accept text-based characters as input. Other encoders, such as the very reliable and highly ranked shikata_ga_nai, are polymorphic XOR encoders that use an XOR encrypting scheme to help evade detection.

Encoding options are only available for the following platforms:

You can use the following options to encode a payload:

Sets the encoder that is used to encode the payload.

The Payload Generator only displays the encoders that are applicable to the platform and architecture you have selected.

Specifies the number of times that you want to encode the payload.

The more times you encode a payload, the larger the payload becomes. You may need to modify the number of iterations if it causes the payload to exceed the maximum payload size.

Defines the maximum size of the resulting payload in bytes.

The maximum size takes precedence over the encoding iterations. If the encoder causes the payload to exceed the maximum size you have specified, the Payload Generator will display an error message.

To fix the error, you can select a new encoder, modify the number of iterations, or set a different maximum payload size.

Specifies the list of characters that you do not want to appear in the payload, such as spaces, carriage returns, line feeds, tabs, and null bytes.

You must enter the values in hex.

You can copy and paste the hex characters into the text box. The text editor will attempt to format the hex

You can use the following options to create the binary file:

Specifies the output type for the payload.

Specifies the format to use to output the payload.

You should only enable this option only if you have uploaded a template file.

The configuration of a classic payload will vary based on the platform, architecture, payload, stager, and stage that you have selected. The following instructions will provide an overview of the steps that you need to perform to generate a classic payload--such as a Linux Meterpreter Reverse TCP payload.

For a list of supported platforms, see Payload Options.

The list of architecture types will vary based on the platform that you have selected. Some platforms, such as Android and AIX, will not have a platform.

From this point on, the steps will vary depending on the platform, architecture, and payload you have selected. Generally, you will need to specify the LHOST (reverse), LPORT, and RHOST (bind) that the payload uses, as well as the output options for the executable. You can also do things like encode the payload.

If the payload generates without error, a window appears and alerts you that the payload has been generated and is ready for you to download. Click Download Now to automatically start the download process.

If your browser is not configured to automatically download files, a dialog window will appear and prompt you to save or run the file. You will need to save the payload to your computer.

Did this page help you?
Payloads
Working with Payloads
Post-exploitation
About Post-Exploitation